A Pinch of Salt!

I called this page “A Pinch of Salt” because the saying is often used to suggest to a person that what they are being told should be treated as likely to be untrue, or easily dismissed if a bit of common sense is used to analyze it.

So it is with Mt Sodom and the Lisan Diapir. As noted on the Creation, Evolution and Noah’s Flood page, there are 500 cubic kilometers of salt alongside and under the Dead Sea in Israel which Noah’s Flood proponents would have us believe got there in the last few weeks of Noah’s Global Flood.

We will take a look at the picture of what is under the ground below the Dead Sea, and then diagram over the picture the timetable of Noah’s Flood according to Andrew Snelling, a popular Flood theory defender.

Below is a seismic image courtesy of  the Geological Society of America (GSA) You can purchase the full papers here. This is a cross section view of the Mount Sodom diapir, viewed end on, and looking from south to north along the western bank of the Dead Sea. This view shows the “submerged” section of the mountain like a big bubble rising “slowly” from the depths. The top section is 2-3 kilometers wide. The length is about 11 kilometers, depth several kilometers! Click to enlarge.

Here is a Google Earth shot of Mt Sodom. This is taken from an angle looking west as if you were standing on the right of the seismic picture above and looking across it to the left. 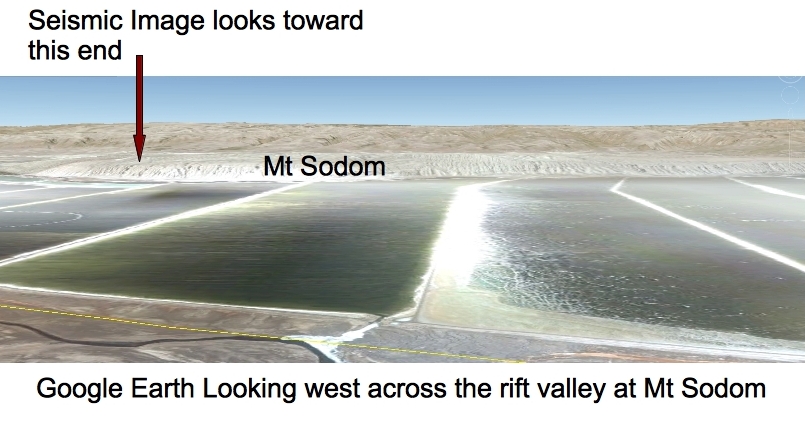 The other diapir is the Lisan diapir. Its top is actually below the surface of  the Lisan Peninsula on the central section on the other (eastern) side of the Dead Sea. It is 13 x 10 kilometers, with a maximum depth of 7.2 kilometers. Its roof is about 125 meters below the surface.

The combined salt volume for these two diapirs would be over 500 cubic kilometers of salt!

Andrew Snelling, in a creationist model, describes the end of Noah’s flood and the event, that opened up the Rift Valley. It goes without saying that if this valley opened up in the last moments of the flood, it did not exist before that time.  This description is in the Answers in Genesis Research Journal, “Building the Creation Model”. I will highlight in bold the critical point.

“… In Israel this great regression, as the Flood waters receded and widespread marine sedimentation ended, also coincided with the commencement of the rifting that opened up the Red Sea and the Dead Sea-Jordan River rift valley along the Dead Sea Transform Fault, …all of which marked the end of the Flood event.”

Thus we have it, on a young earth proponents own authority, that this rift, part of which now forms the Dead Sea, opened up in the last moments of the flood. Here’s an illustration of this illogical sequence.

The big question is: How on earth did two gigantic “blocks” of salt get where they are? One totally submerged, and the other just sticking above the surface, both being squeezed up from kilometers below the surface of the Dead Sea! Even if we took the idea that the Rift Valley opened up part way through the flood event, we still have the mystery has to how 500 cubic kilometers of salt can solidify out of flood waters to form this body of pure salt!

Salt domes or diapirs of this nature are generally believed to be evaporitic. This view is supported by the fact there is currently a salt body forming on the floor of the dead sea as salts are forced out of the saturated waters. It only has a thickness of hundreds of meters – not kilometers.

Flood theorists dismiss the evaporitic theory because there was not enough time in the flood for such slow processes to occur, but what is the answer? Even if we dismiss the evaporation theory as the cause of all this salt buried in a freshly opened rift at the end of the flood – it does not remove the problem:

Where did it come from? It was not there before the flood as there was no rift, yet somehow it is miraculously buried under a landscape that has not changed since Noah lit his first camp fire! I guess there was more than a pinch of salt for his stew, but I’m not sure there is enough to enable us to swallow the flood sequence according to Snelling. I suggest the evaporitic theory or some other answer involving time is best – and is less likely to need a pinch of salt.