My fascination with pakicetus began when I was researching coral and fossil data in the Great Western Desert of Egypt for my Noah’s flood information. I discovered that the pakicetus was a transitional form of whale with leg and pelvic bones.

Modern whales often retain “rod-like vestiges of pelvic bones, femora, and tibiae, all embedded within the musculature of their body walls. These bones are more pronounced in earlier species and less pronounced in later species. As the example of Basilosaurus shows, whales of intermediate age have intermediate-sized vestigial pelves and rear limb bones.” Pakicetus is similar.

As a result of this fascination I have collected a list of the transitional forms of whales.

Pakicetus is an early whale. Now extinct, it was a terrestrial carnivorous mammal of the  family Pakicetidae which was endemic to Pakistan from the Eocene just over 50 million years ago. Pakicetus probably existed for about 15 million years. Many paleontologists regard it as a close relative and transitional stage to our modern day whales.

The pakicetus is particularly interesting because it provides an example of clearly transitional development. Raymond Sutera, in Talk Origens has an excellent article on the sequence and steps in early to modern whale development.

I discovered Raymond’s article some time ago when challenged to show how the pakicetus was transitional. There is little doubt that it is.

Below is a list of some of the earliest through to modern whales.

The Sinonyx approximately 60 million years ago

The Pakicetus approximately 52 million years ago.

The Ambulocetus also about 50 million years ago. It was found in the similar region of Pakistan as Pakicetus, but about 150 meters higher in the fossil record

The Rodhocetus approximately 47 million years ago.

The Basilosaurus between 35 and 45 million years ago 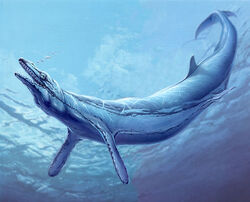 The Dorudon about 40 million years ago contemporary to Basilosaurus and perhaps the group representing the closest ancestor to our modern whales.

Raymond Sutera sums up the changes in form these whales underwent as follows:

“…we have noted the consistent changes that indicate a series of adaptations from more terrestrial to more aquatic environments as we move from the most ancestral to the most recent species. These changes affect the shape of the skull, the shape of the teeth, the position of the nostrils, the size and structure of both the forelimbs and the hind limbs, the size and shape of the tail, and the structure of the middle ear as it relates to directional hearing underwater and diving. The paleontological evidence records a history of increasing adaptation to life in the water – not just to any way of life in the water, but to life as lived by contemporary whales.”